Why fight traffic on your commute to and from work when you can use the time for something you'd rather be doing instead? Board a MetroRail train and watch the scenery, read, catch up with a friend or play on your phone with free onboard Wi-Fi.

MetroRail's 32-mile route is designed to take you to and from your destination, connecting downtown to North Austin to Leander. Whether you are commuting to work downtown, headed to UT or moving between any of the nine stations on the line, MetroRail is the comfortable, reliable way to get where you're going.

How to Ride MetroRail

Check out our Park & Ride locations and look for Route 550 to be connected to a rail station.

Most MetroRail stations are served by bus routes that can take you to your final destination, so you can ride the train and then seamlessly catch a quick bus ride to major employers, shopping and education destinations.

Connector buses will be waiting for you when you arrive via MetroRail at the following stations:

To purchase your fare, use the CapMetro App or visit our Online Marketplace.

MetroRail includes a number of features that make every ride dependable and comfortable.

MetroRail Saturday service has returned! Service begins at about 10 a.m. and operates until after midnight. 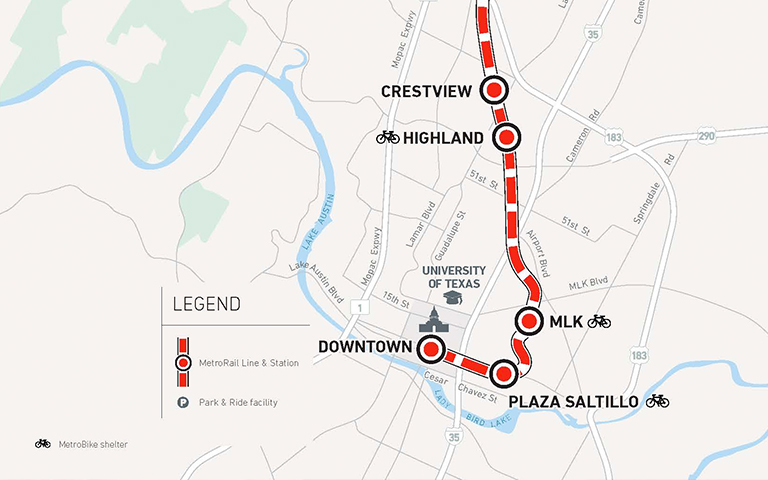 If you're worried about how you'll get home in case of an emergency and thus hesitant to take the train, then we've got you covered. The Guaranteed Ride Home program provides registered MetroExpress, MetroFlyer, MetroRail and MetroRideShare customers with a taxi ride home from work in the event of an unexpected emergency. For an annual membership fee of $5, you can register and get reimbursed for up to 4 emergency taxi rides a year.